Where the Healing Begins (Artist Proof) 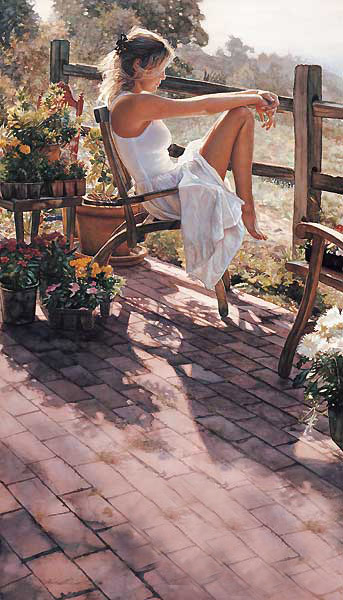 "Where the Healing Begins" by Steve Hanks

"Where the Healing Begins" was the first painting I did that dealt with healing. I saw a story on television about a seven-year-old boy who was dying of cancer. He had two wishes for the last year of his life. He wanted to live on the beach in California, and he wanted to visit other children in hospitals and give out gifts to children who were going to get well and go home! A Malibu resident gave him and his Mother their home for the year, and the Make a Wish Fountation helped him with his second wish.

It was a powerful story that had tears pouring out of my eyes. Six months later I was in California and a friend of mine introduced me to a woman he suggested as a model for painting. When I met her I realized it was the mother of the boy. I knew that her life had been changed forever, I asked her, "How do you try to heal from this?" She would sit out in the sun in the morning and look across the ocean because that was where her son wanted to be. So we started there. I added brand new plants to the scene, still in their plastic containers, with the idea that you have to just start replanting, starting from the beginning and growing from there.--Steve Hanks

Only One Available at this Price